The Zen of Automobile Maintenance

Recycling Resolutions
The Value of Office Hours
Life Balance, Not Work-Life Balance
An English Translation for Jussike
Editing Your Kids 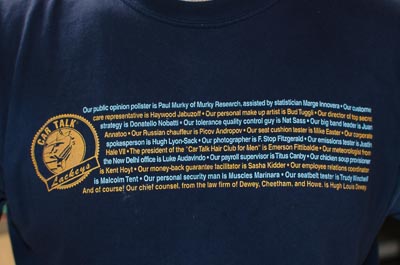 Pick a Saturday morning, right around errand time, jump in the car, turn the ignition, and the radio comes to life with two men laughing. Not just laughing, but cackling, gasping for breath, often a snort or two for good measure. If you had never heard them before, you might wonder what morning zoo rebroadcast got pasted into the spot by a lazy weekend sound engineer. You might wonder, even for thirty seconds or more after the hosts regained some semblance of composure, just what kind of program this was. The rest of us, those who had already squandered more than one perfectly good hour listening to a pair of MIT graduates talk about “life, cars, car repair, and, uh, this week’s puzzler,” knew where we were as soon as that belly laugh hit the airwaves. This was Car Talk, and on a desolate Monday evening in November, the day before election day, no less, we learned Tom Magliozzi died, and we are all the poorer for it.

Conceptually, Car Talk makes almost no sense. I remember first hearing snippets of it on WAMC in the early 1990s and wondering just how desperate the station had gotten that it needed to try to appeal to the do-it-yourself auto mechanic set. Oddly, the end of the show hooked me, with its long, facetious credit list from “statistician Marge Innovera,” to “seat tester Mike Easter,” to the “law firm of Dewey, Cheetham, and Howe.” They appropriated the last of these from Johnny Carson, who himself appropriated it from the Three Stooges, and they made it the name of their production company. One complete listen hooked me. It was part Vaudeville, part personal advice call-in, and consistently hilarious.

Nobody in their right mind would imagine that a pair of gearheads sitting in a radio studio could diagnose car trouble based on callers’ vocal imitations of their vehicles’ noises, even if those gearheads did have degrees from MIT. They were the first to admit this, and featured a recurring segment they called “Stump the Chumps” where people to whom they had given advice could call back in and let both the hosts and the entire radio audience know whether their advice had been sound or, as Tom drew the word out to six or more syllables, “Booooogus.” An hour running errands, seventy-five miles of a long road trip, or even mindless chores around the house could zip smoothly past while the guys laughed and snorted their way through calls and other assorted tangents.

The brothers stopped recording new material in 2012, amid rather vague, self-deprecating comments about their work ethic, but the show remains in production, remixing its thirty-five years of material to provide a new (or at least gently used) episode each week. So in a way, nothing much changes for most of us who never knew Tom Magliozzi personally. His voice will continue to come out of the radio at its appointed time each weekend, and while it’s sad to imagine there will no longer be any chance of new material, with over 1,300 hours in the can it’s hard to complain very stridently. Still, a good friend commented on the news saying she was “irrationally sad” about it. I can relate.

As I thought about why this particular passing would affect so many people in such a profound way, I went through the remembrances that issued forth over the first couple days of the week and found a satisfactory answer in Doug Berman’s discussion with the hosts of WBUR’s Here and Now. “I’m obviously very sad today, and yet you know, just hearing him – you know, I was on the phone smiling. You can’t help it,” he said. Mr. Berman obviously knew him personally, but somewhere in the laugh, the self-deprecation, the obvious wisdom hidden beneath the mantra “unencumbered by the thought process,” it felt personal. It’s hard to fake your personality over a thousand hours of improvisatory radio, so I submit that anybody who listened felt like a personal friend. And a lot of people listened over the years.

The story of the show’s genesis at WBUR, where an engineer called six mechanics for a roundtable discussion on auto repair and Tom Magliozzi was the only guy who showed up, has passed into legend. Those telling the story frequently suggest he showed up to avoid having to work that afternoon and saw a way out. It fits their brand, and it may be true, but my mind keeps drifting to the opening scene of The Muppet Movie, where Dom Deluise, playing Bernie the Agent, lures Kermit the Frog out of the swamp with the suggestion that he could “make millions of people happy.” If you could do that without moving to Hollywood—just by staying in Cambridge and yakking with your brother on the radio—you’d do that, wouldn’t you?

It’s that laugh, always seconds from grinding the proceedings to a halt, absolutely infectious if not downright contagious as it spreads first to Ray, presumably to everybody in the control room, and right out through the airwaves, into your car, your garage, your house, spreading across your face and down into your belly, through your chest like heat, like light. Like love. It’s not irrational to grieve a loss of this nature, but I can give you one guaranteed way to feel happy again. All you need is a perfectly good hour to squander.